Enjoying everything on offer at the city’s modern marina

The construction of the Olympic Port turned Barcelona from a somewhat shabby port city into a glitzy beach resort destination. We check out the best things to do in the iconic marina, as well as which hotels you can check into.

As the name suggests, Barcelona’s Port Olimpic was built to coincide with the 1992 Olympic Games, and it’s appearance on the city landscape is perhaps the most notable of the building projects the sporting event left behind. What was once little more than a disused wasteland is a prime piece of real estate on the coast, and comfortably one of the most attractive areas of the city to visit, full of bars, restaurants, leisure facilities and modern sculptures.

The core of the district is naturally the square-shaped marina, which juts out into the Mediterranean and shines with the paint of bright white sailing boats and yachts, either moored or setting out to sea during the summer months as the rich and famous prepare to cruise up the Catalan coast (if you want to do the same, check out our page on sailing activities!). Meanwhile two of the city’s most instantly-recognisable buildings reside at the port, in the forms of the Mapfre and Arts Hotel – two vast towers casting their shadow over the beach below. These skyscrapers were in fact built as part of the Olympic Village to house athletes during the Games, but are now an office building and 5-star luxury hotel respectively. They also form the perfect landmark for any disorientated tourists, as they are visible from almost every point along the sands.

Below the towers are a number of attractions worth checking out, including the Parc del Port Olimpic, Enric Miralles’ Torre de Gas Natural (impressive glass head offices of Barcelona’s gas company) and the Gran Casino, whilst the visitor is unlikely to miss the gleaming copper sculpture that has become the emblem of the port: known as the ‘El Peix d’Or’ or ‘The Golden Fish’, this futuristic landmark was designed by none other than Frank Gehry, the architect who designed the Guggenheim Museum in Bilbao and has a fetish for all things fishy (indeed the fish is his signature motif!). 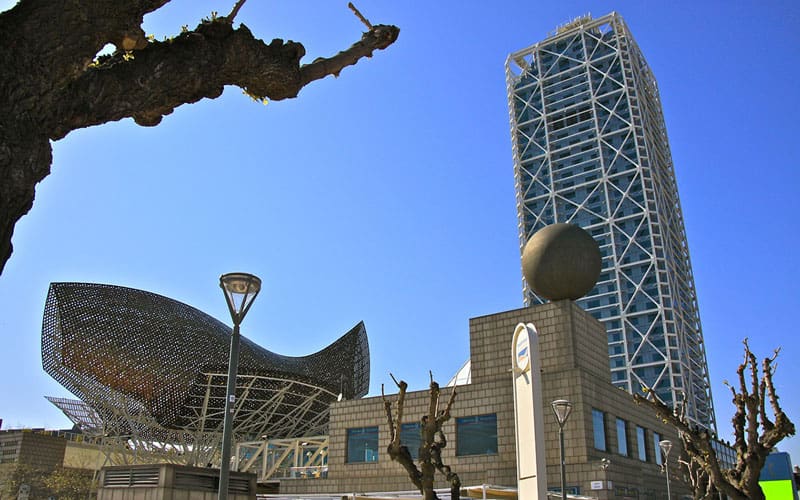 Naturally most travellers calling by the Port Olimpic will be taking a keen interest in one of Barcelona’s greatest assets – its beaches! The famous Barceloneta beach stretches south from the twin towers (right down to the sail-shaped W-Hotel) and is the favourite stretch of sand for the city’s first-time visitors. Northwards, going up to Parc del Forum are the rest of Barcelona’s beaches, starting with Nova Icaria, then Bogatell and continuing via Mar Bella and Nova Mar Bella to Llevant (it’s on these sands where generally-speaking locals prefer to congregate).

At night, and especially during the hot summer months, Port Olimpic becomes one of Barcelona’s most popular nightlife districts thanks to a long stretch of upmarket restaurants and nightclubs such as Ice Bar, CDLC, Shoko and of course the legendary Opium Barcelona, whose beach-side terrace has a superb Mediterranean restaurant. Cool cats in expensive beachwear and sunglasses stop by for evening cocktails, whilst smart couples head over for dinner, before dressed-up damsels and bronzed Adonises taxi their way to the strip later in the evening for dancing and general misbehaving.

After the lounge clubs kick out at 3am many head over to Pacha or Catwalk Club both of which keep going until 6am. As of course does Opium, the most popular hotspot in town… and for those party animals who fancy taking a VIP nightlife tour that finishes in Opium click here!.

Meanwhile those that don’t make the grade at the ritzy venues can always drown their sorrows at a cheesy gauntlet of free-entry bars and clubs on the Moll Mestral in the marina itself. Skinny dipping in the Med. afterwards is strictly optional!

If you fancy bedding down by the beach, it’s hard to look past the Hotel Arts… provided you’ve got plenty of cash to splash. Otherwise you can get in contact with one of Barcelona’s many apartment rentals agencies, as several have pads for hire in this sought-after district. Otherwise you might be best heading a bit further away to the Poblenou district where hotels abound, especially in the redeveloped area around Diagonal Mar.

For general info you can try the official Port Olimpic website, available in several languages. Or head to our districts guide to read more about some of the city’s other great neighbourhoods!

Fun On The Water