From the classic, but chronically overcrowded, Barceloneta, to the hipper city sands of Bogatell and Marbella, and not forgetting the best beaches within reach by bus or train, we take a look at all of Barcelona’s most pleasing playas…

It’s hard to believe that prior to the 1992 Olympic Games, the Barceloneta district of Barcelona was one of the least desirable areas of the city. This is where they dumped the poor people who got displaced during the construction of the notorious Ciutadella fortress, and the district was characterised by its narrow alleys, tiny flats and the smell of fish hauled in from the boats. But thankfully the coastal winds of change did finally blow, and before you could say ‘pass me my gold medal’ the neglected area was transformed into the bustling Barceloneta beach front and one of the city’s foremost attractions.

Even if you’re not ‘a beach person’ it is well worth riding the metro to Barceloneta, as this particular sea front is as about as colourful human circus as you’ll encounter here in Catalonia. 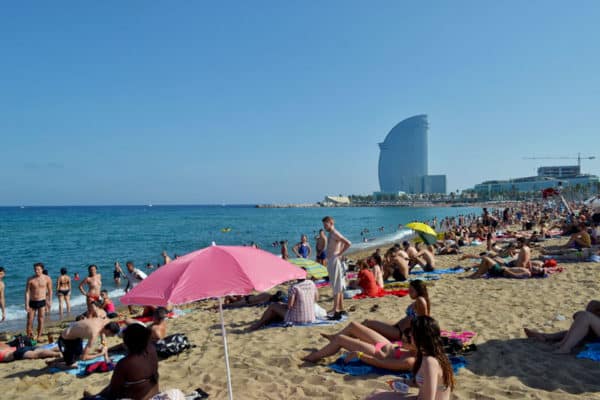 Jostling for towel space, with the W-Hotel in the background

Apart from the obvious pleasures of swimming in the Mediterranean, sunbathing on the sand or taking a stroll along the Passeig Maritim you’ll find tonnes of things to see and do. For a start there’s Rebecca Horn’s quirky monument ‘Homenatge a la Barceloneta’ to check out, and further towards the Olympic Port there’s Frank Gehry’s spectacular, glittering gold ‘Pescado/Peix/Fish’, but those are just some sweet cherries on the cake.

On the beach itself you’ll find people engaging in a host of entertaining activities such as playing volleyball, sumo wrestling (with fat suits), practicing capeiro, having a sing along, playing the bongos, whilst hawkers patrol the sands selling everything from samosas and cervezas to beach towels and massages.

Everyone from respectable families with young kids, to dreadlocked layabouts enjoy spending time at Barceloneta and the open-minded will certainly enjoy the carnival of characters that turn out for an afternoon’s siesta on the sand. And whilst you might happen to park your towel next to two sexy senoritas in skimpy bikinis, you might too find yourself sharing a patch of sand with a one-legged tramp sunning his genitals with a smile on his face. Good old Pedro.

Although the sea will prove defiantly nippy outside the summer months (and it should be said it’s not the cleanest) there are many who brave the waves in winter for a bit of surfing or windsurfing – whilst there’s no shortage of yachts sailing in and out of Barcelona’s harbours. Behind the beach, Passeig Maritim de la Barceloneta stretches down towards the Port Olimpic and this pleasant boulevard is full of strollers, rollerbladers, bikers and skateboarders killing some time in the sun. 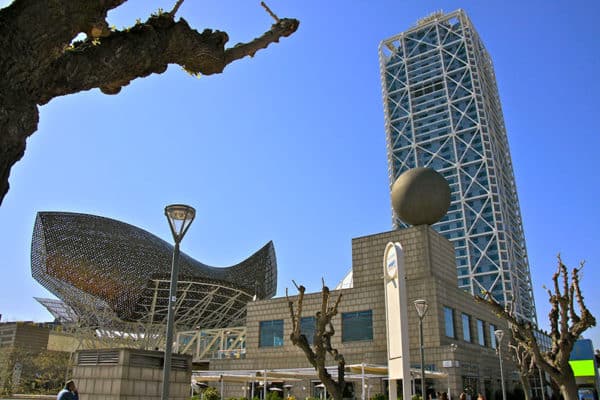 If hitting the beach for you is synonymous with a glass of sangria or two, then fear not. A range of chiringuitos (or ‘beach bars’) open during summer and serve up cold beers and refreshing cocktails throughout the day with ad hoc beach parties often taking place in the evenings. Nearer the Port Olympic you’ll find a host of some of Barcelona’s most exclusive venues, which play restaurant and beach bar by day and metamorphose into decadent nightclubs after the sun has gone down. Carpe Diem Lounge Club, Shoko and Opium are just a few names to look out for on the beachfront, whilst set just off the sand is Catwalk, along with Barcelona’s casino.

Finally if you’re feeling peckish a host of paella restaurants can be found on the unnecessarily long-winded Passeig de Joan de Borbo Comte de Barcelona, overlooking the Moll d’Espanya harbour back towards the city.

To get to Barceloneta beach either take the metro (yellow line) to the appropriately named Barceloneta stop, or approach from the other side by alighting at Port Olimpic. If you’re staying in the Old Town consult your map – the Barceloneta district is only about 15 minutes from the Christopher Colombus monument at the bottom of Las Ramblas so your feet should be able to last the distance.

One Day in Barcelona

Other City Beaches in Barcelona

Barceloneta isn’t your only option when it comes to beaches in BCN and here is a run down of some more hot ‘platjas’ (Catalan for ‘playas’!). 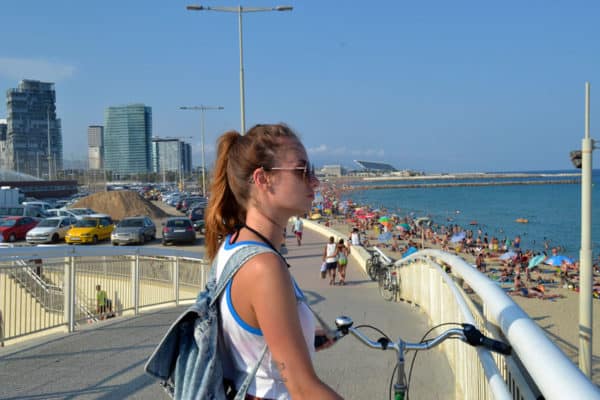 Even the Northern beaches get busy these days!

Quieter than the main strip, Sant Sebastia stretches up to the right (if you’re looking out to sea) of Barceloneta towards the sail-shaped Hotel Vela at the end of the peninsula. A popular spot with nudists. Has got busier in recent years with the development going on.

Platja Passeig Maritim, underneath the street of the same name, is to all intents and purposes considered part of Barceloneta. It is a little wider than Barceloneta itself and slightly less claustrophobic, but you will still need to hustle for some towel space.

A favourite with Barcelona’s young and deeply bronzed locals, this is where you’re most likely to have cheesy Spanish house music blasted at you from a cheap stereo. Gets very crowded.

According to Barcelona’s official website, Bogatell attracts the oldest sunbathers in the city, making it a more mellow beach experience. Although the many chiringuitos blasting out party tunes tells a different story. A table tennis table is on hand if you fancy a bit of ping pong in between dips. In recent years has become a favourite spot for amateur volleyball players who set up their own nets here.

Mar Bella beach is popular with nudists (it has a designated nudist section, conveniently located behind some reed-topped rocks) and gay and lesbian visitors, and being a fair distance from any metro stop (Poblenou is the closest) it has a bit more of a local vibe – many sunbathers come by bike. It also has some lively chiringuitos and is also popular with volleyball players. 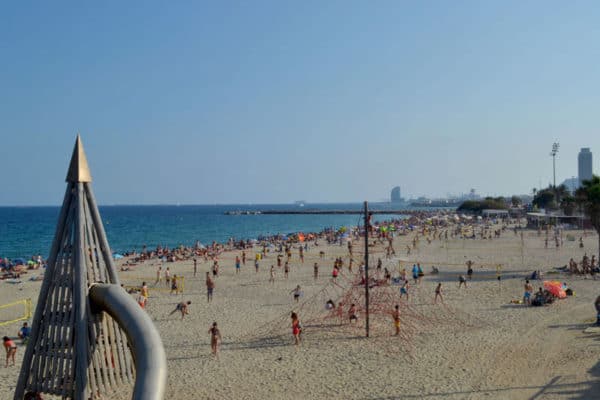 This playa is a favourite with the ladies (again according to official sources), with 60% of visitors being of the fairer sex. Perhaps its reclusive location stops them from being ogled by eagle-eyed perverts?

The last of Barcelona’s city beaches, is not the prettiest, but at least you won’t get pestered by any hawkers trying to sell you beers. Nearest metro Selva de Mar.

We’ll bring you a rough guide to the best sands outside of Barcelona soon, although if you can’t wait that long at the very least check out our guide to the charming town of Sitges which has no less than 17 blue flag awards, and is just half an hour away by train.