Sightseeing from the saddle

With a host of specialist companies in town, clement weather and an ever-increasing number of bike paths, exploring Barcelona on two wheels is a tonne of fun… here’s everything you need to know to get going, including a comparison of the top tours in town.

Why Explore by Bicycle?

A bike tour is a great way to see Barcelona, and has numerous advantages over traditional walking tours. The most obvious is that being on a bicycle enables you to see much more of the city, but those of you who like a little exercise will also appreciate the chance to burn off a couple more calories and keep the oxygen flowing to the brain as your invariably knowledgeable guide regales you with fascinating histories and amusing anecdotes.

The chance to rattle around Barcelona on two wheels will also make you feel a little more independent (and dare we say ‘cool’) than those who’ve hopped on the nearest tourist bus – and you can even maintain the moral high ground on environmental friendliness. There’s no carbon emissions generated from pedal power.

The fact that Barcelona is (with the exception of the odd mountain) an incredibly flat city with over 300km of bike paths (and more planned) should provide additional incentive to get in the saddle and discover the town’s best attractions.

8 Advantages of Exploring by Bike

Most of Barcelona’s numerous bike tour companies offer both private tours and group excursions with a guide. As well as catch-all routes that take in the likes of La Sagrada Familia, Barceloneta Beach and La Rambla in one circuit, you’ll also find some exciting alternative tours on offer, concentrating on different themes (like eating tapas or football) or taking you to less-heralded, but equally fascinating, districts.

Find our recommended list of providers below, many of whom also do bike rentals if you prefer free-wheeling it…

Looking for a two-wheel ride you will never forget? The Steel Donkey team (the donkey is the national animal of Catalonia in case you were wondering!) offer small group adventures around the city of Barcelona, riding in groups of no more than 8 people. Their friendly guides are all Barna locals, with an eye for the fascinating details and stories that others might miss, and a nose for adventure. You won’t get a history lesson on Gaudi, but you might learn a little bit about Catalan independence and see sides of the city that most tourists simply don’t know about as you spend a unique afternoon uncovering Barcelona’s secrets. There is no fixed itinerary as such, but beach bars, side streets, chocolate and churros, flea markets and forgotten cemeteries are just a few delights you may well experience. A simply great tour for people who don’t like to be tourists. Tripadvisor Certificate of Excellence winners in 2013 to 2019, check out their bike tour reviews, or their website below.
www.steeldonkeybiketours.com A great compromise if you want to combine sightseeing with a bit of exercise – but not test the lungs or thighs too much. These fun and easy to ride electric bikes offer battery-powered assistance to your cycling, ensuring you can climb hills and cover distances with ease. They offer a number of great routes, starting with their flagship Barcelona Gaudi Highlights Tour (€39), which is a round up of Gaudi’s most iconic architecture, including the Casa Batllo, Casa Mila and La Sagrada Familia, which also stops by the Gothic Cathedral, Arc de Triomf and the beautiful Parc de la Ciutadella. They also have an option to go inside the Sagrada Familia (€69), if seeing Gaudi’s wondrous church from the inside is top of your priorities list. Another intriguing option is their Gourmet Tapas & Wine Tour (€59), where you explore the beautiful backstreets of Born, before enjoying three kind of wines and tapas in the wonderful 4 Gats cafe.
www.barcelonaebikes.com 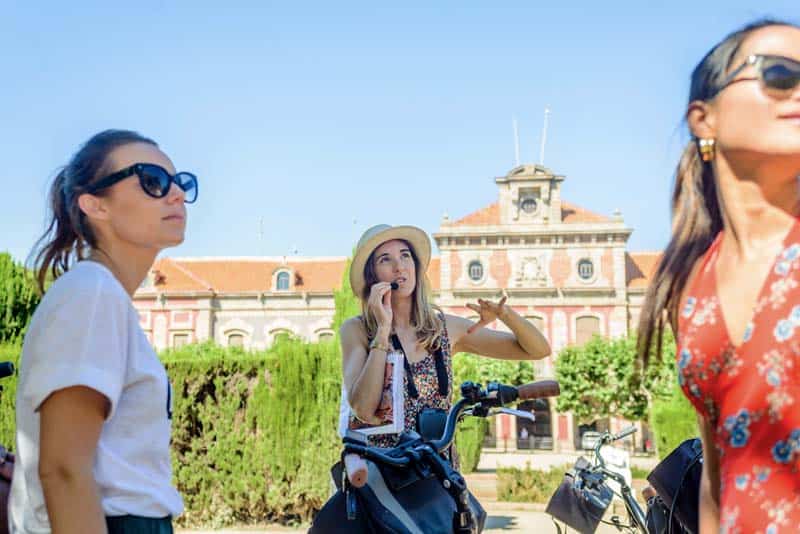 Fat Tire’s first ever sortie in the saddle took place in Paris back in 1999, and today you can find them in 12 cities around the world, including of course Barcelona. If you’re looking for the classic round up of the city’s main attractions for a fair price you can’t go wrong, and no need to take our word for it: their Barcelona Bike Tour was voted 11th Best Experience in the World and 9th Best Experience in Spain by TripAdvisors’ Travelers’ Choice Awards 2018 & 2019. Crowd-pleasing sights like the Gothic Cathedral, La Sagrada Familia, Parc de la Ciutadella and the beach make for a great introduction to the city, and their guides are young, charismatic and fun. Popular with backpackers and budget travellers they usually ride in groups of 15 people. You can securely book their most popular experience, The Barcelona City Bike Tour via their website. They also have a host of other great experiences, such as their bike tour with skip-the-line Sagrada entry. Full options on their website. 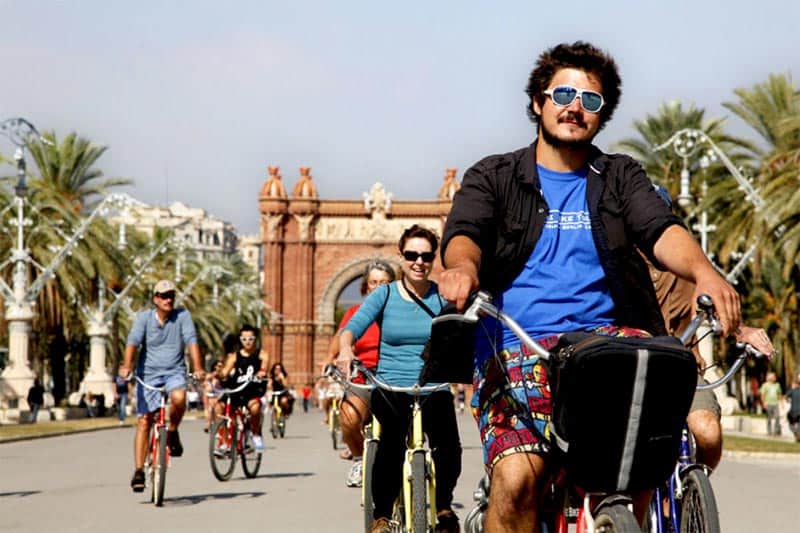 Baja Bikes are one of the world’s leading bicycle tour companies, operating everywhere from Amsterdam to Zakynthos. Despite being Dutch-owned they actually started here in Barcelona, and their Highlights Tour is a natural choice for those visiting the city for the first time. This three hour bike ride uncovers the secrets of Las Ramblas, the winding streets of the Gothic Quarter and many of Gaudi’s greatest hits, including of course La Sagrada Familia. The itinerary also includes the famous Colombus Statue and delightful Parc de la Ciutadella, and as well as some less known highlights. The tour includes time for a coffee break and your guide will give you plenty of historic and cultural insight into the Catalan capital. They also have a popular Tapas and Sightseeing Tour, where you also get to try three local tapas with a drink as part of the activity.
www.bajabikes.eu/en/barcelona-sightseeing A new player on the scene, Buena Vista explore the Catalan capital in small and intimate groups which respect the city, and its citizens. Their Barcelona City Bike tour takes in many of the city’s top highlights, such as La Sagrada Familia, the Palau de la Musica, Ciutadella Park and Plaça Sant Jaume, as well as some curious and hidden treasures off the usual tourist trail. The tour runs daily at 11am and 4pm, from Plaça Reial (one of the city’s most beautiful squares!), and led by passionate and knowledgeable locals who delight in showing travellers their home town. The relaxed vibe means there’s plenty of time to talk, take photos and – on a warm day – have a picnic on the beach.
www.buenavistatours.es Specialists in road biking, a day in the company of Montefusco involves more than tottering around the tourist sights… on their Hills Around The City Tour you’ll cover more than 80km of ground as you take in the entire city, starting from the epic Parc del Forum then following the route of the River Besos, before climbing up mighty Tibidabo mountain and cycling along the ridge of the Collserola hills for some of the best views of your life. If you want to go further afield they also organise trips to the small town of Sitges and the beautiful landscapes of Montserrat. This is a small and personable company that caters for serious cyclists.
www.roadcycling.barcelona 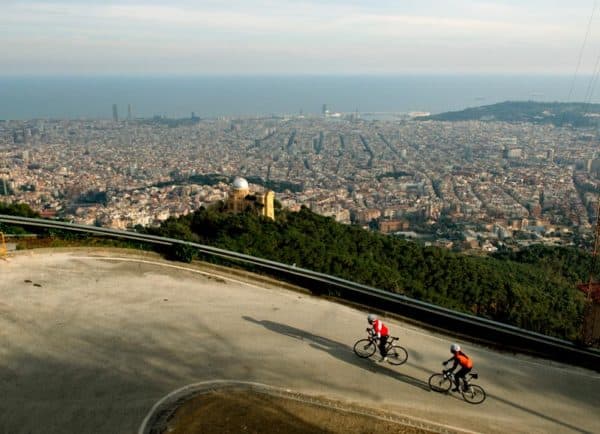 The Hills Around Barcelona with Montesfusco Cycling

Run by a boutique tour company specialising in premium small group tours, this “Land, Sea and Air” experience is a Barcelona E-bike tour with Montjuic Cable Car and Boat Trip all included. First you ride your Mercedes electric bicycle up to the magical Montjuic Mountain, where you will hop on the famous teleferic cable car and admire the Catalan capital from the air. From here you can enjoy a stroll around the Olympic Ring and Montjuic Castle. Next you’re back on the e-bikes to ride down to the port and get on board on the Eco-Boat, which will take you along the coastline to the Olympic Harbour with splendid views of the city from the water. From here there’s still time to whizz up to the wonderful Passeig de Gracia to check out Gaudi’s biomorphic mansions, as well as call by the mighty La Sagrada Familia. 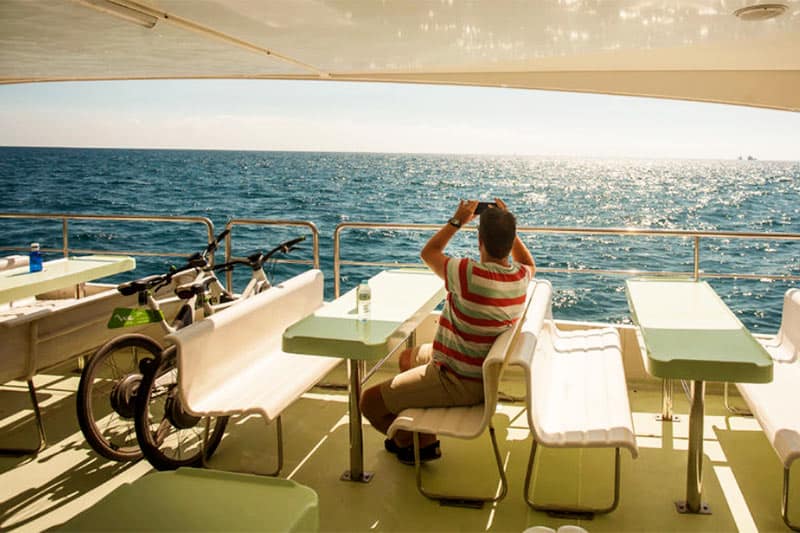 So there you have it… plenty of great options to choose from, and no excuses to not get in the saddle. And while you don’t have to be Chris Froome to take a bike tour (my mum has joined me on a couple of the above!) and many tours support young children, basic cycling competence is required. In other words, if you’ve never ridden a bike before, check out our guide to the best walking tours instead!

For a little more on what to bring, plus a couple of suggestion for cycling tours that take you out of the city, keep reading…

What Should I Bring?

Nothing too bad will happen if you rock up to a bicycle tour with just the shirt on your back (and some shorts hopefully), but this is what a boy scout would bring, in order to be totally prepared for a few hours in the saddle:

Cycling Outside The City

If you’re a serious cyclist craving some hardcore thigh burn, then check out our guide to cycling and mountain biking in Catalonia. There’s some amazing countryside to be discovered, whether you’re interested in a day trip or a lycra-sponsored excursion.

For people with normal-sized thighs and fitness levels, there are still a couple of really fun and accessible bike rides that get you out of the city. As a bonus, they all seem to involve wine….

Setting off daily from the Gothic Quarter, your tour guide will lead you up the coast to the picturesque village of Alella where you’ll visit one of Catalonia’s only family-run urban wineries, and stroll along its ancient vineyards. Your Mercedez-Benz electric bike makes the journey a doddle, and there’s plenty of great maritime views to enjoy en route, before you tuck into a picnic and sample some of the winery’s best vintages. Don’t worry about drinking too much, as you’ll take the train on the way back. The rolling hills and vineyards of the Penedes region make an idyllic setting for a bit of low key pedalling, punctuated by wine tasting. On this half day tour you catch a train out of town to Laverns-Subirat station (about 50 minutes away) in the Penedes wine region.  From there your genial guide will guide you around the local countryside on natty electric bicycles, before taking you to a boutique family-run winery for a cellar tour and organic wine tasting. You can book via Get Your Guide. If you prefer to spend the whole day in the Penedes, there’s a full day tour option as well. Confession time! I’ve been blogging about Barcelona since way back in 2009… in other words, apart from quite a few more grey hair since arriving in the city, I’ve got plenty more great advice for you, whether you want to work out which Gaudi buildings to visit, what is the best day trip to go on, or which is the best value Barcelona Card. Follow the links to articles with more of my local tips!