The highlights – and lowlights – of a stroll down the famous boulevard

We reveal some of the most noteworthy sights and things to do during a stroll down Barcelona’s most iconic street – as well as what to avoid! Plus tips on the best bars and restaurants on the boulevard, and where to stay if you’re looking for a hotel in the heart of the city.

The Good, The Bad… and The Ugly

The throbbing heart of the city to some, a heinous tourist trap to others, Las Ramblas boulevard not only divides the Old Town in two, but it also polarises public opinion. Championing its positive attributes, the poet Federico García Lorca once described the iconic avenue as “the one street in the world I didn’t want to end,” and there’s still plenty to justify the Spanish poet’s praise, particularly the Parisienne vibe, created by the outdoor cafes and colonnades of slender trees, and the playful performance artists and boisterous carnival atmosphere of this 1.2 km stretch of street.

The throbbing heart of the city to some, a heinous tourist trap to others, Las Ramblas boulevard not only divides the Old Town in two, but it also polarises public opinion.

Referred to both as La Rambla (singular) and Las Ramblas (plural), the name derives from an old Arabic word ‘ramla’ meaning sandy riverbed, and indeed that’s how this magnificent boulevard started – as a humble dried-out stream outside the walls of the Gothic Quarter. At the start of the 18th century the first houses were constructed, and only by the end of the 18th century did La Rambla start to appear in something like its present form, a sweeping tree-lined boulevard in the centre of the city. 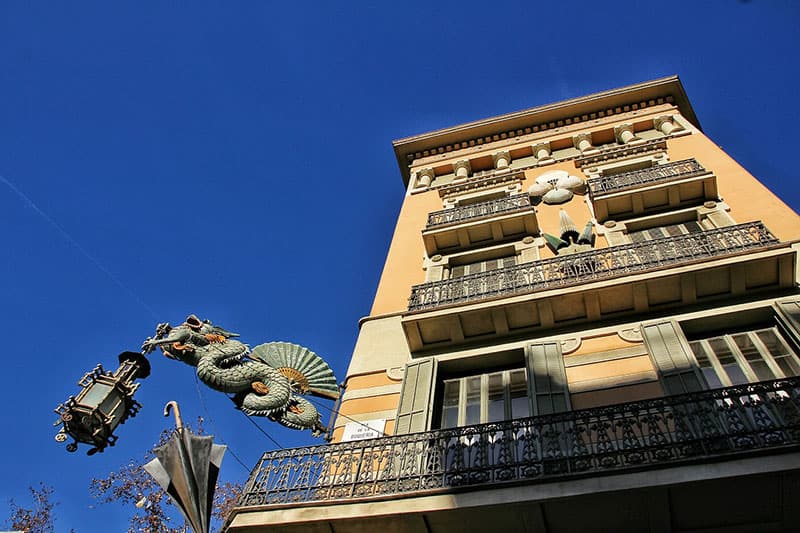 The street is most-commonly referred to in the plural, Las Ramblas, because it is in fact a succession of streets, which start at Plaça Catalunya with the Rambla de Canaletes and work their way down via Rambla dels Estudis, Rambla de les Flors, Rambla dels Caputxins and Rambla de Santa Monica to the newly constructed Rambla del Mar, which links the boulevard to the Maremagnum shopping centre on the Port Vell. (NB: there are several more Ramblas in Barcelona, including Nou de la Rambla and Rambla del Raval, but these are separate streets altogether!). Just as it joins the city centre and the sea together, Las Ramblas divides the two most central districts of Barcelona’s old town, the touristic Gothic Quarter on one side, and the shabby chic area of El Raval on the other.

A walk from the top to bottom of Las Ramblas is undoubtedly highly rewarding and you will find a healthy selection of Barcelona’s worthy attractions en route, such as La Boqueria food market, the Liceu Theatre, Miro’s mosaic (watch where you step!) and the Monument to Columbus.

As you might expect there’s also a handful of the city’s most upmarket hotels and several great places to eat and drink – and more than a smattering of bad ones, including the ubiquitous global fast food chains. 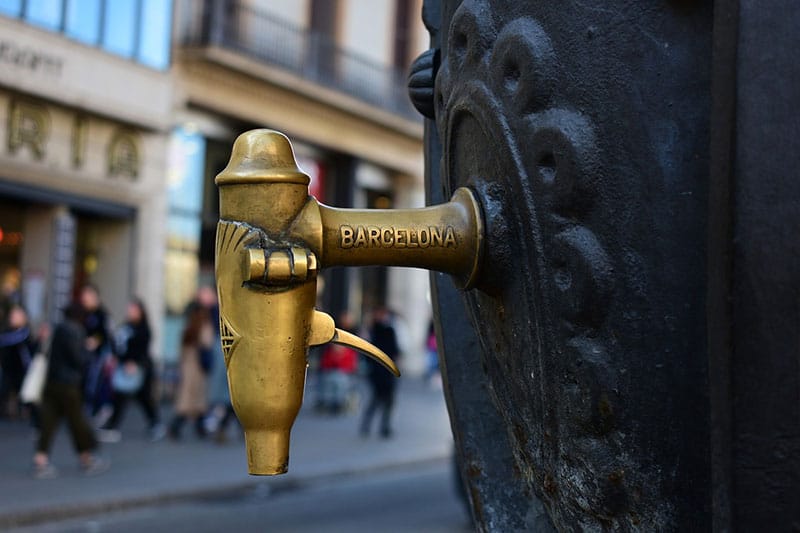 These in part are what have given Las Ramblas a twofold reputation of late, and there’s no doubt the street, teeming with tourists and the businesses that cater for them, has in some sense become a victim of its own popularity. Whilst its central location means it will never be abandoned by the citizens of Barcelona (they couldn’t, even if they wanted to!), Las Ramblas increasingly resembles a touristic circus with tacky gimmicks and T-shirts for souvenirs, chronic overcrowding and soulless consumerism. Worse the area is frequented with pickpockets (a plague in Barcelona) who prey on naive travellers by day, whilst after dark scores of prostitutes openly ply their trade.

But let’s keep things in perspective! Whilst there’s no denying there’s an undesirable side to roving on these famous tracts, it’s not exactly Armageddon out there just yet. By day, Las Ramblas still represents some unmissable and highly-entertaining sightseeing, as the city bustles in full flow and street performers in the shape of demons, gladiators, clowns, ballerinas, flamenco dancers and many more outrageous guises, entertain, terrorise, mimic, beguile and charm passers-by. 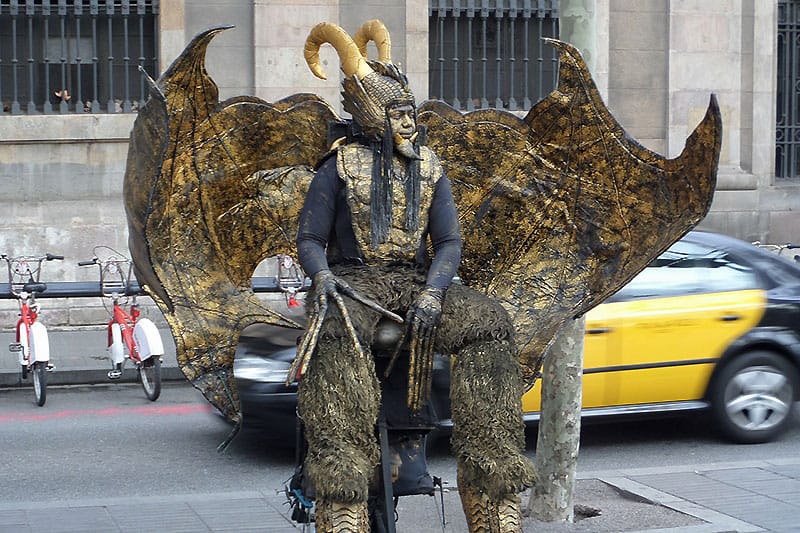 Las Ramblas is an essential calling point for all tourists in Barcelona, but first time visitors should take this rollercoaster ride of a road with a pinch of salt. The real soul of this sensational city is to be found elsewhere… our city guide will point you in the direction of all Barcelona’s greatest attractions and coolest districts.

With KFC, McDonalds and Starbucks all hawking their mass produced muck, you might have thought Barcelona’s iconic thoroughfare had completely sold its soul, but in fact, if you can look past the logos, there are still a few classic locales that help keep the credibility of the street intact.

Near the top of the street for example, almost out of view, you’ll find the city’s first ever cocktail bar, the legendary Boadas, a signature locale with timeless class. Also preserving the old school vibe is the charismatic Cafe de l’Opera, which offers great snacks and drinks, opposite the still popular Liceu Teatre. 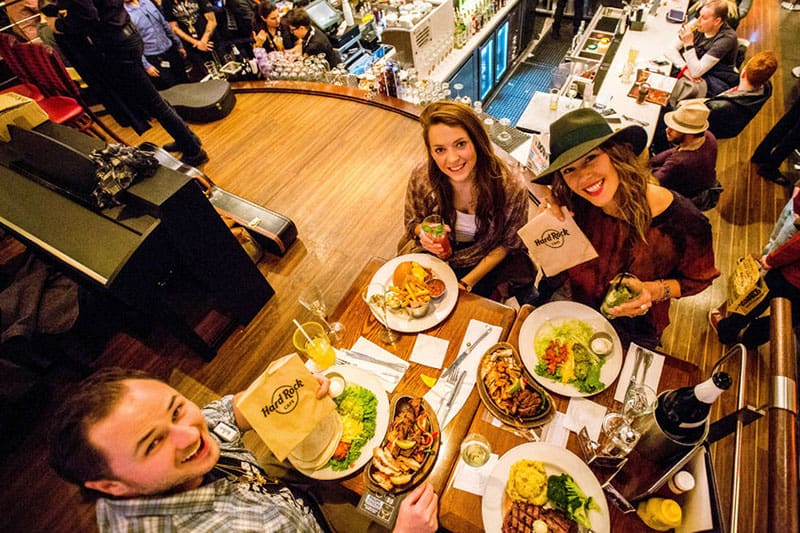 For a more substantial meal, Barcelona’s very own Hard Rock Cafe can be found on Placa Catalunya, just at the top of Las Ramblas. Amongst the classic rock memorabilia, you can enjoy a slice of Americana with their legendary burgers and other mains, best followed by a brownie with hot fudge and ice cream. As you can imagine, it’s a pretty popular hang out, so best to reserve your meal in advance.

For something a little different El Bosc de les Fades, annexed to the Wax Museum, is a fun place to quaff jugs of sangria in a surreal fake fairy forest.

If you absolutely have to be in the heart of the action during your Barcelona break then fear not, there are plenty of accommodation options on the city’s most famous street. The king’s choice would undoubtedly be the 5-star Hotel Meridien, a luxury palace with all the mod-cons. 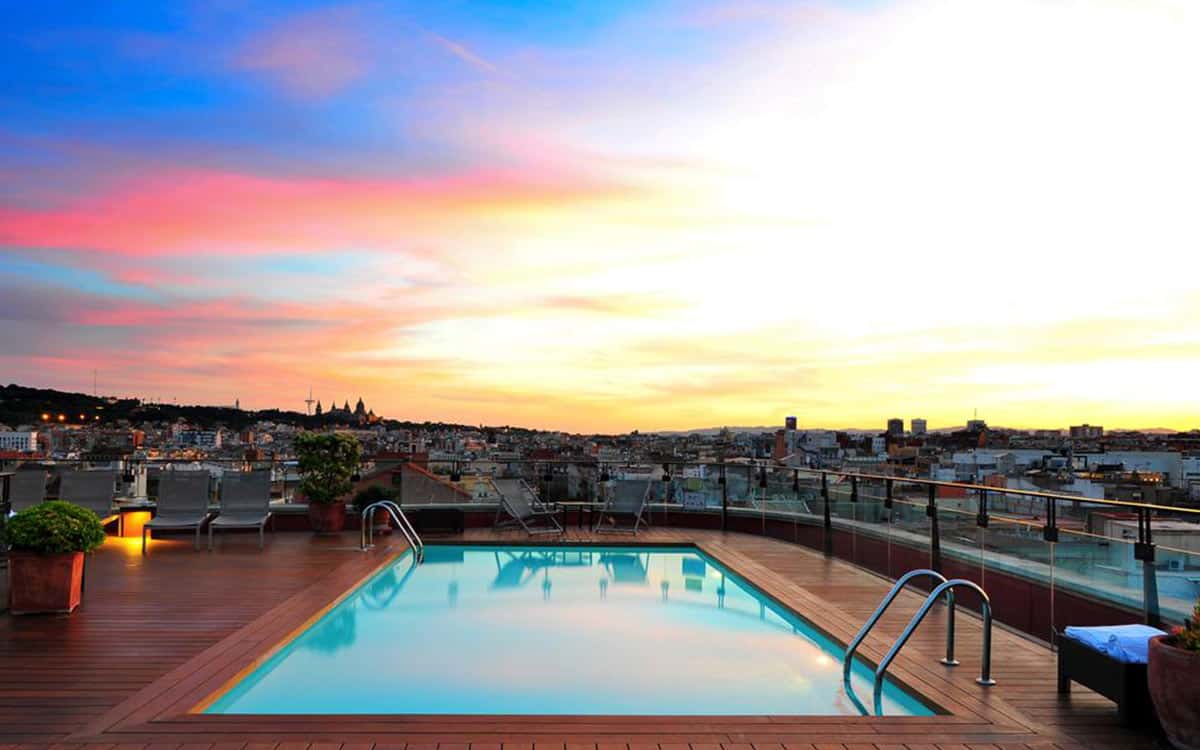 Meanwhile the Hotel 1898 and Royal Ramblas are two four-star hotels well worth putting on your shortlist.

Alternatively get in contact with some apartment rental firms and see what they can do for you!

For a full list of places to stay, anywhere in the city, check out our hotels and apartments directory.

Take my advice, and don’t leave home without booking tickets to Barcelona’s key attractions. Queues for top sights like La Sagrada Familia and Park Guell can be hours long, and if you don’t reserve skip the line tickets you are going to waste a lot of your valuable holiday time. You might even get turned away, so do be sure to spend some time planning your itinerary and securing your tickets.

Here are some of the most popular places on Get Your Guide, which is a handy travel marketplace where you can buy all your tickets on one website…