A gem of the Costa Brava, we introduce Tossa de Mar, its history, things to do about town, and selected hotels, restaurants and beaches.

Two thousand years of history, a magnificent sweeping sandy bay, and plenty of breathtaking coves that typify the wild coast of the Costa Brava within easy walking distance, all make for compelling reasons to visit Tossa de Mar, a picturesque resort town just over an hour away from Barcelona.

Tossa’s unique selling point for travellers is undoubtedly its Vila Vella (“Old Town”), a formidable walled enclosure on a headland overlooking the Mediterranean sea, crowned by several ancient towers and a more modern lighthouse. In fact it is the only fortified medieval town still standing on the Catalan coast, making it unique in this corner of Spain. With its turrets, cannons and viewpoints it’s a great place for an afternoon ramble. Leafy and imperious it also makes for a wonderful photo opportunity from down on the beach… that’s the view you’ve seen on every gallery and postcard.

Like most of the pobles in Catalonia, Tossa de Mar began life as an Iberian settlement before being colonised by the Romans in the 1st Century AD when Augustus and chums were expanding their Empire. In fact you can visit the ruins of a rather beautiful aristocratic Roman villa – Els Ametllers – high on the hills surrounding the town, and see the remains of a spa, floor mosaics, sculptures and several items from every day life that are nearly two millennia old.

It wasn’t until the middle ages that the battlements went up, giving Tossa the aesthetic that still exists today. In those times the town was under the jurisdiction of the Abbot of the Ripoll Monastery whose castle was built on Mount Gardi hill, where the lighthouse now stands today. In later centuries the town swelled beyond the fortified walls and around the headland, meaning there are some beautiful cobbled streets, townhouses and churches still to explore beyond the original walled city. 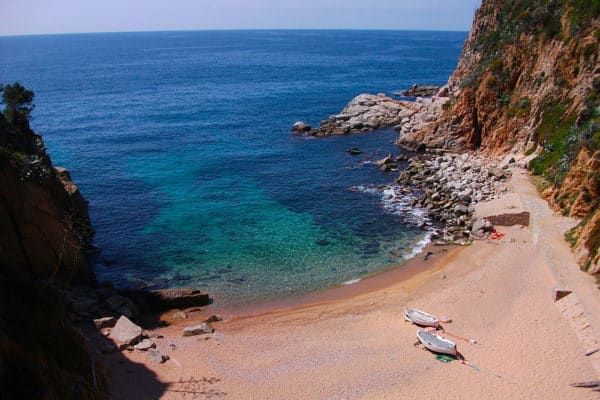 Tossa’s beaches are a big draw

Around the 1950s the growth of tourism saw a new swathe of the city built, mostly hotels. Thankfully this was done with much more tact than in some parts of Spain, and whilst not all of the constructions of the last decades would win any architectural prizes, the modern traveller can feel grateful that they don’t impeach on the charm of the Old Town.

Of course beaches play a major role in the lure of anywhere on the Costa Brava, and Tossa’s main stretch of sand is a picturesque – if crowded – place to spend a summer’s day, with ferries calling in from the likes of nearby Lloret del Mar, and smaller fishing boats bobbing on the surf, or lying upturned on the coarse sands, having been dragged back from the shoreline.

The more adventurous should set aside a day to hike on the marked trails that lead over the pine forested rocky coastline, as this is how you’ll get to some of the more secluded beaches

The more adventurous should set aside a day to hike on the marked trails that lead over the pine forested rocky coastline, as this is how you’ll get to some of the more secluded beaches and quiet coves nearby, with crystal clear emerald waters. In other words the stunning scenery the Costa Brava is famous for!

Overall Tossa proves a perfect one-day excursion from Barcelona, or a nice relaxing or romantic weekend break from the city. Those who enjoy the slow life, or were thinking about using the town as a base to explore some of the rest of Catalonia, could even extend their time here to up to a week without getting bored… allowing for more time to go hiking and find those wonderful coves and beaches.

The delights of Catalan cuisine are now heralded around the world, and most visitors to these parts will come with high expectations about the food. And they won’t go home disappointed. With one or two exceptions, Tossa is not about haute cuisine, but rather about traditional dishes, well prepared, and for jaw-droppingly low prices. For around €12-20 you can expect a four course meal with wine and coffee, as the many good quality tourist restaurants compete with your custom with enticing menus del dia (set meals of the day). Normally you can choose from several options for each course, so it’s hard to go wrong. One popular place full of character is Berlin (C/Sant Antoni 8-10), a German styled (but still Catalan!) restaurant which is one of the most affordable of the bunch. For something a bit special though you shouldn’t miss Can Sophia (C/Roqueta 10-12), the upmarket restaurant of the four star Casa Granados hotel, where chef Josep Pagès serves up both tapas and main dishes made from fresh, locally-sourced ingredients. Later at night you’ll find a few good bars scattered around town, but generally speaking for raucous nightlife you might be better of catching a bus or taxi to nearby Lloret de Mar.

If money is no object then look no further than the aforementioned Casa Granados (www.casagranados.es), a romantic boutique hotel that sprawls across a the foot of a hill just near Mount Gardi. From the hotel’s terrace bar you can see the famous fortifications of the Vila Vella not far away, and sip on a cocktail, in between taking a dip in their open air designer swimming pool. The rooms themselves are decorated to be both homely and refined and in the event a rare grey day you’ll be more than happy to while away an afternoon in such luxury!

For something more affordable the one star Hotel Windsor (www.hotelwindsortossa.es), with swimming pool, great location and epic breakfast spread feels like better value than many three star options… and you can even play tennis at their sister hotel up the road.

Getting to Tossa de Mar from Barcelona

The Costa Brava’s craggy coastline means you can’t reach her by rail, but fortunately Sarfa run a reasonably regular bus service from Barcelona (normally about six buses a day), journey time around an hour and twenty minutes. And, if needs be, you can also go by train to nearby Girona, and from there catch a bus to Tossa. Girona has its own small airport so you may even be able to transfer directly if you can find a flight that arrives there (as most will land in El Prat, the major transport node of the region).

Holders of a driving license may prefer to check out deals on car rentals. We list one or two firms here. Fans of grease and leather might prefer to arrive on two wheels. Whilst lycra lovers should explore the possibility of cycling up the Costa Brava, for an unmissable holiday.

For more info check out the official website: www.infotossa.com, and for more photos head to our Facebook page!