Things get juicy at the world’s most famous food fight

Camping near the Festival

Don’t miss one of Spain’s most iconic festivals! You can reach La Tomatina by flying into Valencia, or you can bus it in from Barcelona. Choose between buying tickets independently or travelling with a party-loving crew.

Spain isn’t short of festivals that border on madness – as anyone who has witnessed the running of the bulls in Pamplona, or the pyrotechnics of Las Fallas in Valencia will attest – but La Tomatina in Buñol, south of Barcelona is right up there with the wackiest!

To visit the event with our recommended travel gurus see options below!

Essentially a huge food fight, where the weapons are 150,000 fat tomatoes, La Tomatina takes place on the last Wednesday of August each year and sees tens of thousands of revellers descend on the humble village of Buñol from all regions of Spain and beyond for the chance to take part! 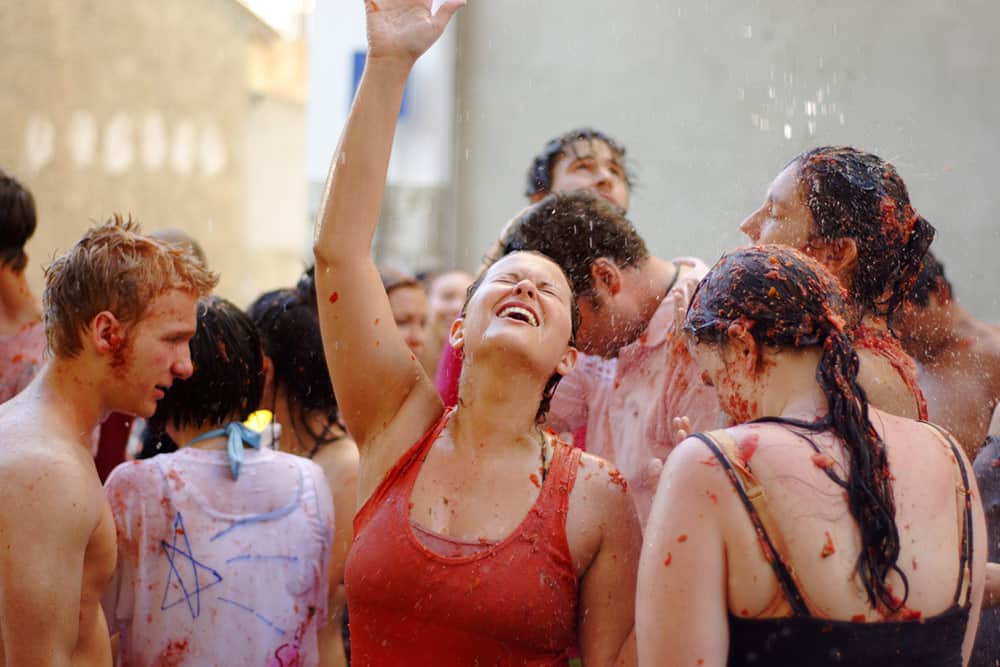 Locals spray water down from their balcony (Photo by Lukasz Lech).

Despite its fame and stature, the festival is in fact a short-lived (but very crowded and messy) affair. It begins (rather incongruously) at 11am when a ham is placed on top of a large and greasy pole in the town square, and the tomato fight can begin only when someone is dextrous enough to clamber up and grab this meaty prize from its perch. Cue lots of mayhem as agile Spanish folk scramble on top of another to claim the jamon.

As soon as this feat has been accomplished lorries full of tomatoes drop their first load of fruit on the ground and the crowds fight to pick up the dormant projectiles and hurl them at one another’s pristine white T-shirts (it is tradition to dress in white for maximum before and after contrast!). Meanwhile the lorries continue their journey up the ram-packed streets of Bunol (causing the already squished crowds to squish even closer together to allow them to pass – this festival is not for the claustrophobic!) and as well as dropping more tomatoes at they go a number of cheeky residents sit on top of the lorries pelting the crowd with juicy tomato after juicy tomato! As you’re shoulder to with the rest of the crowd you can’t fail to hit someone and the whole thing is incredibly silly – which is of course what makes it so much fun!

As the trucks finish their journey and all the tomatoes have been disgorged, thrown and re-thrown the crowds disperse, reeking of tomato with bits of fruity flesh and seeds in their hair – but thankfully a number of kind citizens of Buñol hose down the revellers (if you’re thinking of attending La Tomatina be sure to bring a change of clothes!) – and the crazy tomato fight is over for another year!

Since this crazy fiesta got so popular in the 2000s, the authorities decided that it can no longer be free and unregulated. The party is now limited to 20,000 ticketed entries, with tickets costing €10.

We are 100% behind this move, as on our last visit things were so crowded as to be uncomfortable, so hopefully these regulations are for the better. We are still trying to find a bit more info about this to be honest, but this link seems to be the official website for purchasing them.

Otherwise keep reading because we do recommend some organised tours that include tickets in the price (along with transport etc.).

History and Origins of La Tomatina

There is no one definitive version of how La Tomatina started, but the tradition of a tomato fight has taken place in Bunol since at least 1944, although the festival was banned during much of the Franco years for having no religious significance – it was revived with gusto in the 1970s. Theories on why the first tomato fight took place include a food fight among friends, a juvenile class war between bare-footed Trotskyist macarras and upper class pijos from Madrid on summer vacation, a volley of tomatoes from bystanders at a carnival parade, the rubbishing of a bad musician, a democratic protest against the city council and (our favourite) the ensuing aftermath of an accidental truck spillage. Whatever the cause, the folk of Bunol obviously thought it was a mighty grand idea and promptly re-invoked the tradition the following year! Today from 20,000 to 50,000 people come from all over the world to get fruity with one another!

Getting to La Tomatina Festival

So the all important question: how to get to La Tomatina? Well the festival takes place in Buñol (Bunyol), a small town of 9,000 inhabitants about 38km outside Valencia. Many festival-goers choose to stay in Valencia the night before as there is not much accommodation in Bunol itself, and from there it’s easy to get the train into Bunol (the first leaves at 7am, and it’s worth going earlier to be sure of fitting on board and getting a good spot for the fight!).

From Barcelona you can either make your way to Valencia the day before by train (journey time 3.5 hours, tickets 25-50 euros each way – book via Renfe) or by bus (4.5 hours around 20 euros) and stay the night there, before making your way to Bunol the next day.

By far the easiest – and surprisingly economic option – is to go with a tour company. A number of tour companies organise a coach ride to the festival (usually leaving Barcelona city centre around 4am and getting you to Buñol for 8/9am with plenty of time to have a drink or two and get in position). Apart from requiring no brain power on your part, it can be cheaper than travelling by public transport – especially as there’s no need to fork out for a night’s accommodation in Valencia.

We have now teamed up with one of Europe’s craziest travel companies to offer you a great deal on a day trip to La Tomatina. There is no need to book any accommodation as buses leave BCN at the very early hour of 3:30am on the day of the fiesta and take you back at 4pm the same day (arriving back at 7pm) once the action is over!

The cost is just 80 euros per person, and that includes festival ticket (so no need to worry about that!), return bus journey, guides and even includes some free drinks to get the party started. This is undoubtedly the easiest and most economically-friendly way to enjoy the day and best of all you’ll also be with a coach load of other international fiesta people! For more info head to the Stoke Travel website and check the “Day Trip from Barcelona” in the trip options at the bottom of the page. 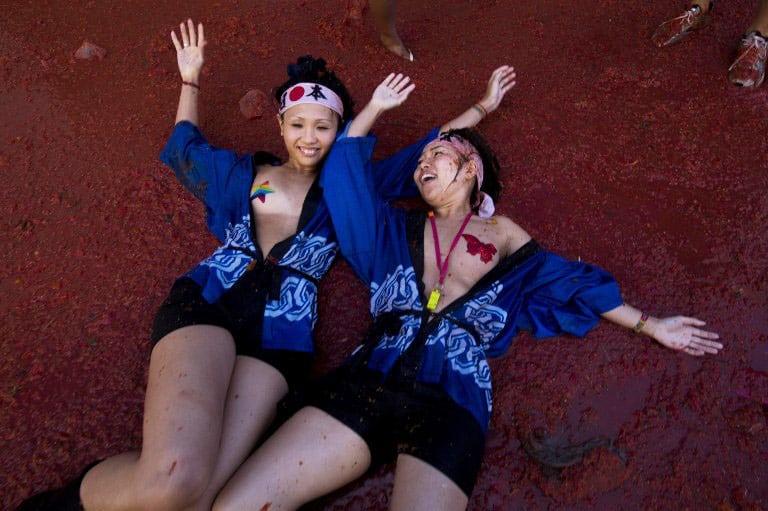 Getting into the spirit of things (Photo by Diariocritico de Venezuela).

Make a mini-holiday out of the world’s biggest food fight by booking yourself on this wild trip that includes transport to and from Barcelona (or you can fly direct to Valencia!), two, three or four night’s camping in a comfortable campsite with swimming pool, BBQ dinners, party trip to Valencia and of course shuttle transport to La Tomatina itself on the day of the festival!

Experience the best of Spanish culture, nightlife and fiestas with a crazy crew of fellow adventurers and tour guides… there are lots of options for this experience, all of them well-priced, so if you want to know more then head to the Stoke Travel website and check the “Trip Options” at the bottom of their page.

The most important thing to bring to La Tomatina is a change of clothes, which you can either leave in the coach of the tour company you came with or you could carry in waterproof bag (many residents spray the festival goers with waterhoses from the vantage point of their balconies!).

Many festival goers choose to wear goggles, although there is no need to buy them in advance as they are available for 2 euros in kiosks all around Bunol.

It’s best to wear old trainers over flip flops or sandals as the latter are easily lost in a crush, or you can have your feet stomped on!

Expensive camera equipment is a big no-no! If you want to take photos get a disposable water proof camera, a go-pro or a else take a small pocket camera coated in clingfilm (for waterproofing).

It’s best to get there early and get down into the centre of the action as soon as possible if you want to see the pole-climb at the start. Also the majority of tomatoes are dumped in the centre and so if you really want to be bathed in red juice and not just lightly speckled you should hustle for a good place.

Drinking before the festival is part of the fun, but be warned. Long before the tomatoes arrive you’ll be wedged into position until 12pm when the fight is called to a halt… in other words there’s no chance to nip off to the toilet, so be careful before you fill your bladder!