Keeping busy when the autumn weather kicks in…

From film festivals to scoffing toasted chestnuts, there’s plenty of things to do in November, whatever the weather…

November is pretty much nobody’s favourite month… so you may as well get away from the pre-Christmas, autumnal gloom at home and jet out on a Mediterranean city break.

If you prefer sharing a destination with as few people as possible, then this is one of the best times of year to book your flights, and enjoy some of Barcelona’s attractions with only a manageable amount of tourists for company. Culture vultures won’t care that it’s not beach weather when they’re busy admiring the handiwork of Gaudi, Domenech i Montaner and Picasso (more on each below!).

Apart from fewer tourists, you should find prices of hotels and apartments more affordable in autumn, and backpackers should also be able to save a few euros on their hostel beds. Overall this might just be the most economic month to visit.

Events-wise and there’s a mix of traditional celebrations like All Saints Day, and more modern offerings like L’Alternativa Film Festival festival. And while this is not the season of street parties and music festivals, the city’s regular nightlife is still in full flow, and sociable folk can always sign up for a pub crawl.

With the average November high temperature in Barcelona around 17ºC and an average low of 8º, this is usually the month where the temperatures noticeably drop in the city, so you’ll need to add a jacket and jumper to your packing list. The lower temperatures aren’t all bad news though; they can make a day of sightseeing considerably less sweaty!

Other weather considerations to bear in mind are that the month averages five days of rain, and that the days are also quite a bit shorter, so you may have to get up earlier if you want to see all the main attractions by sunlight.

You can keep an eye on the weather here.

Things To Do in November

As with any time of year, there’s more than enough to keep you occupied in the Catalan capital, day and night. We’ve rounded up a few of our favourite things to do in Barcelona in November to help you plan your trip. November starts off with a holiday in Spain – El Día de Todos los Santos, or All Saints’ Day. It’s a national public holiday to honour and remember the dead. Flower vendors line the streets to sell floral displays to people to leave at their dearly departed’s graveside. But it’s not all sombre contemplation; this is also the day when people traditionally eat small round almond cakes called “panellets.” Look out for them on sale at bakeries around the city. 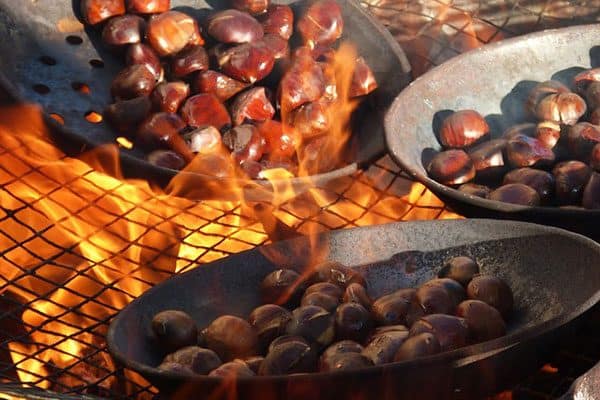 One of the traditions of All Saints’ Day is to eat hot toasted chestnuts (“castanyas” in Catalan) that come wrapped in newspaper. They start being sold by street hawkers with pop-up roasting stalls around the holiday, and they continue doing brisk business throughout the winter. They also often sell roasted sweet potatoes at the same stalls.

3. Visit La Sagrada Familia While You Can! 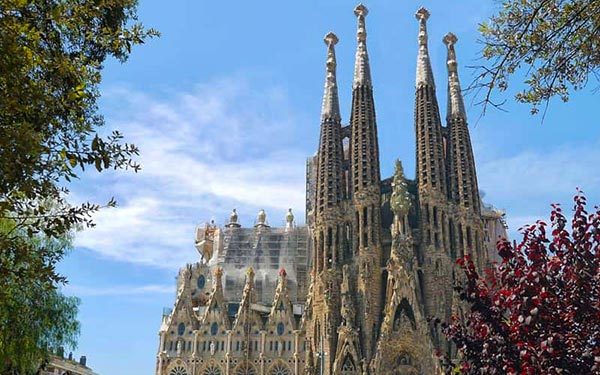 Around 3 million people visit Gaudi’s masterpiece each year, and it’s rarely less than chock-full, especially during the summer months. November is actually one of the best times to visit as its one of the city’s quieter months for tourism, and you should have a bit of breathing space as you marvel at the white forest-like interior of the nave, and ascend / descend the towers. Check out our page for more info on skip the line tickets, tours and towers or go right ahead and reserve via Get Your Guide. We’d recommend one of the tickets with both audioguide and tower access.

4. And Don’t Forget The Other Modernista Marvels! 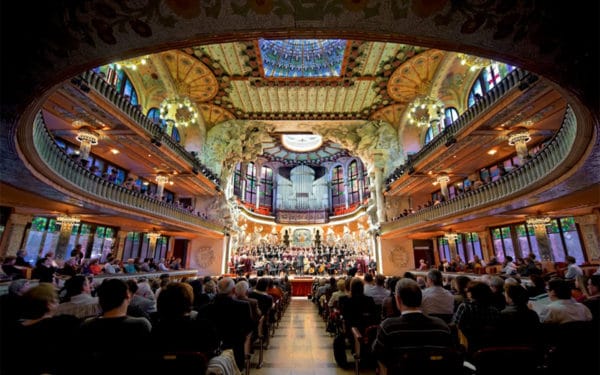 Barcelona’s unique aesthetic comes from the artistic movement known as Modernisme, also known as Catalan art nouveau. Gaudi was just one proponent of the genre (in fact his most famous works took on a style all of his own), and his contemporaries like Domenech i Montaner and Puig i Cadafalch are held in almost the same esteem by locals for the architectural legacy they left. You can see some of Barcelona’s most beautiful façades when you visit the Palace of Catalan Music, as well the Hospital of Sant Pau and the Casa Amatller for starters. A guided tour of the former is well worth it, as you also get to see the stunning concert hall and inverted golden dome skylight. You can’t leave Barcelona without trying Spain’s signature dish… but why not go one further and learn how to cook your own rice and seafood feast (vegetarian options also available!)? During this fun and laidback experience your expert chef will take you on a tour of the famous Boqueria market, before heading back to the kitchen to share the secrets of a great paella. As well as contributing to this culinary masterpiece, you also learn how to mix a mean jug of sangria. At just €39 per person, this is a great activity to do instead of a restaurant lunch or dinner. 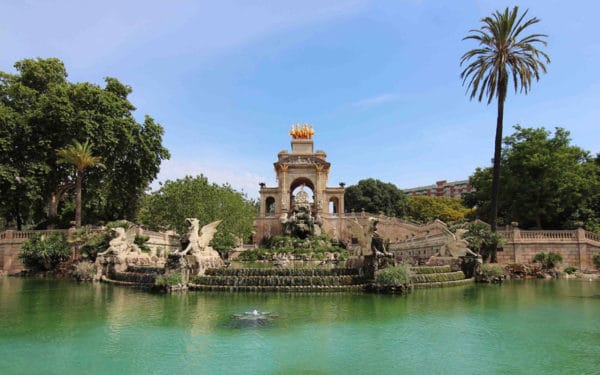 Not all of Barcelona’s trees change colours in the fall, but plenty of them in the ‘Citadel Park‘ do. November is a great month for a stroll in the park to enjoy the autumn foliage. Take a picnic or rent a rowboat, or simply walk around and take in the sights. If you’re visiting with kids, the zoo is located inside the park too. For our complete guide to all of Barcelona’s parks head here.

7. Lock Yourself in an Escape Room A hot craze in Barcelona right now, and indeed the rest of the world, escape rooms offer participants the chance to pit themselves against the clock in a battle of wits. By solving a series of puzzles, one after another, you have to move closer to finding the key or the code that will allow you to exit the room before the time is up. Each room has its own theme, and you might find yourself doing anything from rescuing Gaudi’s blueprints for La Sagrada Familia to infiltrating a secret society known as the ‘WD’. Read a list of some of our favourite rooms here. The perfect activity on a wet autumnal day. 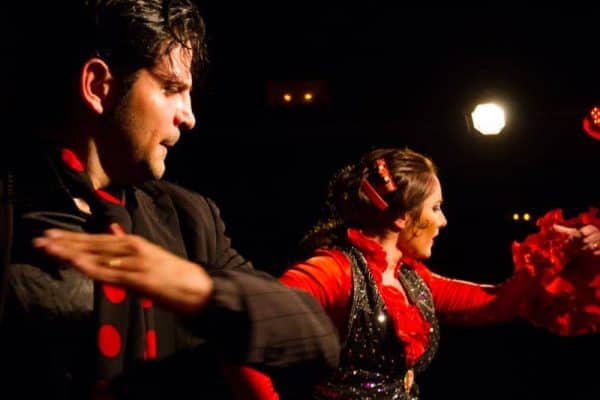 An extremely popular activity, the Tapas & Flamenco experience is a great one for fans of Spanish culture who want to sample two of the country’s most typical traditions, both of which have strong roots in Catalonia as well. First you get to watch a passionate 40-minute flamenco concert in a central tablao, before sampling some authentic dishes served up and down Spain. The activity runs every night and you can find more info here.

9. Take a Wine Class with a Sommelier 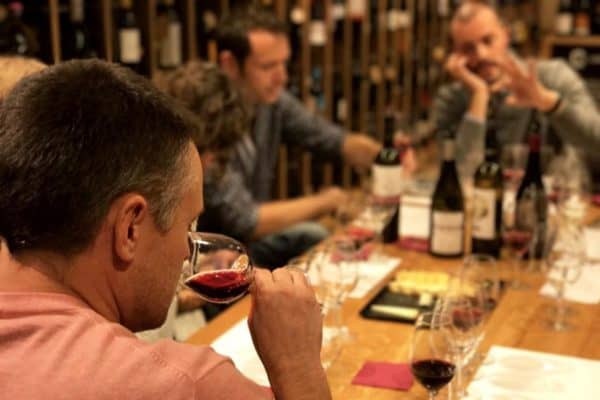 Spanish wines are both very affordable and extremely underrated. In this fun workshop that takes place in the city centre, you will taste five local Catalan wines in the company of an expert sommelier, who will first introduce you to several smell and taste challenges to train your palate. The wines are paired with gourmet cheeses and by the end of the session you’ll leave with a firm appreciation of the local vintages, and a better understanding of wine in general. The session can also be arranged at your hotel or apartment if you prefer.

10. Get Brainy at the “Barcelona Pensa” Festival Barcelona’s very own philosophy festival is held in mid-November every year. It’s promoted by the Department of Philosophy at the University of Barcelona, in a bid to get the city more involved in philosophical thinking. It takes place at multiple locations around the city and features talks, presentations, workshops, and debates (naturally). You may need to brush up on your Catalan though to make the most of it.
www.barcelonapensa.cat The Catalan capital is as lively by night as it is by day, and this bar crawl of some of the city’s best nocturnal venues is a great way of experiencing the local nightlife. Starting at a hip craft beer and live music bar in the Gothic Quarter, you’ll wind your way through the old town streets to several more charismatic bars, before ending the evening in a late night venue. At Barcelona Life we know how to party, so we contacted the pub crawl guys to get you an additional free bar on arrival. Just say BARCELONA LIFE / HERO’S WELCOME when you arrive! 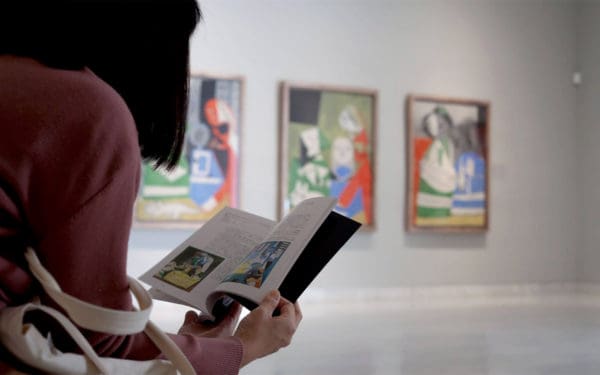 Picasso spent his formative years in Barcelona, and his legacy in Catalonia is marked by the museum that bears his name, as well as by a number of places he frequented during his time here. You can buy tickets to the museum, where 3,500 of his works are exhibited – with a focus on his early life and the evocative Blue and Rose periods – on the museum’s official website; however real aficionados are advised to sign up for this tour, offered by the official tourist board via Get Your Guide. The tour includes not only an insightful guided visit to the museum, but also a tour of Bohemian Barcelona, during which you’ll be taken to the stunning 4 Gats cafe, the art school where Picasso studied, and learn about the prostitutes that modelled for some of Pablo’s most famous works.

13. Buff up on the Best Films of the Year Both the In-Edit film festival featuring musical documentary films and L’Alternativa Film Festival for independent films typically take place in November in Barcelona. If you like films, this is the perfect time to check out what the city has to offer for cinephiles. Held on the fourth Thursday in November every year, Americans abroad tend to head straight down to the nearest Irish bar to eat their traditional Thanksgiving dinner. Flaherty’s do a great one every year if you’re looking to get your fix of turkey and stuffing for the year with some fellow Statesiders. …either to watch the mighty FC Barcelona in action, or if not then you can still sign up for the Camp Nou Experience, when you’ll take a tour of the legendary 99,000 seater stadium, pitch, dressing rooms and of course FC Barcelona Museum – with one whole room to dedicated to Messi! Standard tickets cost €26, but you might want to consider purchasing the PLUS experience for €35 as it includes an audio guide and the chance to relive historic goals using a Virtual Reality headset, as if you were at the stadium.

17. See the Start of the Christmas Season

In late November, the first signs of the Christmas season start to appear on the streets of Barcelona, like holiday markets and festive lighting displays. The exact dates vary from year to year, but you’ll definitely start to notice some of the Christmas cheer descending on the city by the month’s end. Catalonia has some frankly bizarre traditions at this time of year, so read up about the caganer and grab yourself a celebrity pooper at one of the markets.

So there you go… plenty of things to see and do this November! But if for some reason you haven’t filled your agenda yet then check out this long list of fun and unusual activities. 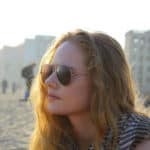