A beginner’s guide to the charming district of Gracia, including where to stay if you’re here on your travels. (Photo credit).

A large district that spreads across the foothills of the Collserola mountain range, Gracia was founded in the 17th century by the Carmelite order and for over two centuries was a separate village to Barcelona. However the poblebecame part of the whole when the vast Eixample district was constructed, bridging the gap between itself and the Old Town.

Owing to its long history, Gracia has more in common with the medieval districts of El Gotico, Borne and Raval than the industrial-revolution-funded Eixample which is sits above, and its narrow streets and plethora of pleasant plazas to while away the hours are undoubtedly what lend the barri much of its charisma.

For many Catalans and foreigners, Gracia has become the district of choice for those that want to enjoy the charms of Barcelona, but without the tourists and overcrowding that often afflicts La Rambla and the Gothic Quarter.

For many Catalans and foreigners, Gracia has become the district of choice for those that want to enjoy the charms of Barcelona, but without the tourists and overcrowding that often afflicts La Rambla and the Gothic Quarter. And whereas multi-culturalism, immigration and tourism mean that English and Spanish are the linguae francae of downtown BCN, in this more remote district you’ll find that many bars and cafes have menus only in Catalan, and you’ll find more than a few pro-Catalan-independence splashes of graffiti. Look out for “Freedom for Catalonia” scrawled on bins, or the donkey stickers on cars and mopeds that is a riposte to Spain’s symbolic bull.

What is there to see in Gracia? Well the main attraction is of course Park Guell, on the outskirts of the district. Antoni Gaudi’s famous gardens are one of the top attractions in Barcelona so naturally there’s a treadmill of tourists that alight at Plaça Lesseps and make their way to the park that featured famously in Vicky Cristina Barcelona, L’Auberge Espagnol and other classic movies. Thankfully, for those that prefer quieter spots, most won’t venture into the heart of the district, where certified tourist spots are few and far between (the exception is perhaps Casa Vicens, although you can’t go in), but there’s much fun to be had by wandering around. There are so many great little squares, and cute cafes like La Fourmi or Vreneli Cafe, where you can stop for a drink and simply enjoy hanging out.

Plaça del Sol is usually considered the central plaza, and whilst a host of bars and restaurants (such as the cute taperia Sol Soler), and even the odd nightclub, circumnavigate its borders, the interior acts as a social centre for a loveable mix of OAPs, dog-walkers, kids, beatniks and tramps. During warmer months it’s tradition to sit on the concrete and crack open a supermarket carton of sangria. Naturally, if you have more than a few euros to your name, you might prefer to stump up for a cold cerveza on one of the actual cafe terraces.

Later in the evening Gracia becomes a real hub of Barcelona’s nightlife, and with great bars like La Cigale, Tournesol and many more, it’s easy to see why. Generally speaking Gracia venues are all about eating, drinking and socialising, and whereas there are a few select places to dance, the district is more for making merry making in the traditional way – so if it’s flash nightclubs you’re after better to head to the Port Olimpic instead!

The one time of the year when Gracia really goes off though is of course in mid-August during the Festa Major de Gracia! During this rambunctious festival the residents of the barri hold a competition of “best dressed street” and half of the city descends night after night for a right royal knees up that involves plenty of beers, live music, mojitos and dancing. Definitely a date for your diary. 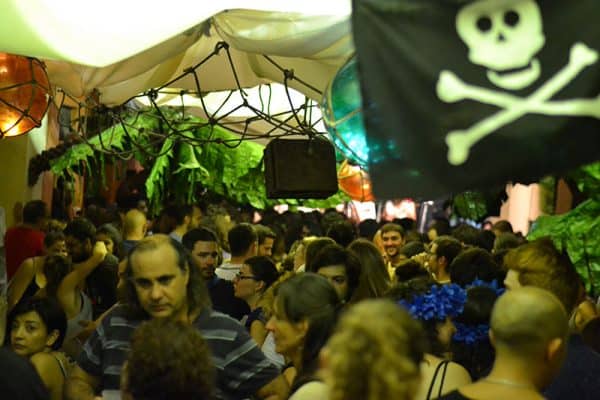 Things get a little crazy for the Festa Major….

For other hip zones check out our Barcelona districts guide which has an overview of all the most interesting areas of BCN and of course links to individual articles.

As the district has become increasingly trendy and well-known, there has been a growing demand amongst savvy travellers for accommodation in this part of town: which is why you can now find a decent range of hotels, hostels and apartments available if you’re set on staying here. One recommendation that springs to mind is Aparthotel Silver, a boutique-style hotel just near the Fontana metro station (handy for getting downtown). A relatively new budget option meanwhile is the vast and modern Generator Hostel on the bottom lip of the district, just five or so minutes walk from Placa del Sol.

Otherwise you can always check our list of apartment providers, where you’ll find plenty more options.